An illustrated talk by Andrew Campbell in

Sutton Veny Church with a free glass of wine, followed by an optional supper in the Village Hall 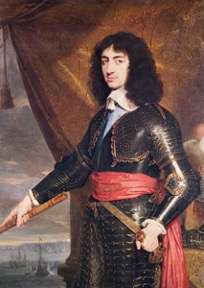 To his supporters, Charles Stuart had been King Charles II since the show trial and beheading of his father two years earlier.  To Oliver Cromwell,  Charles was a “Malicious and Dangerous Traytor”.  Charles’ forlorn attempt to win back the crown by force of arms came to a bloody and  calamitous end at the Battle of Worcester on 3rd September 1651.

That night, in what was probably  the bravest and wisest decision of his life, the 21-year-old Charles dismissed all his followers; except one, his devil-may-care cavalry commander, Lord Henry Wilmot.  Three hours later they began to run for their lives.  Cromwell’s wanted posters put a price of £1,000 on the fleeing King’s head, describing him as:  “A Tall Black Man above two yards high.”

This is the remarkable story of how, when their cause was at its lowest ebb, brave Royalist men and women, rich and poor, risked torture and death to help the two fugitives reach France and freedom. Had anyone earned the £1,000; Charles would most certainly have suffered his father’s grim fate and Britain would have remained a republic to this day.

Organised by the Friends of Sutton Veny Church

Tickets for the talk with free glass of wine £10 and optional supper is also £10.

The On line Booking form is here:

(Any questions to: The Secretary [email protected])