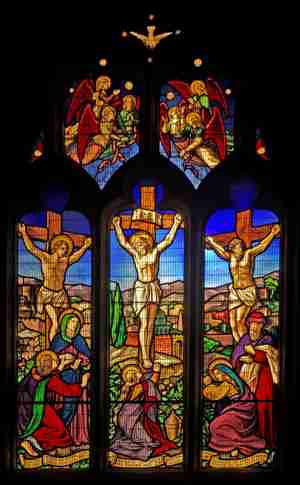 The Benett family, who started out as clothiers, were lords of the manor in Norton Bavant from the mid-C15.  By the C18 the family’s main residence was Pythouse at Semley but they retained the estate at Norton Bavant.  Lucy was the daughter of John Benett, MP, who financed the rebuilding of the body of the church between 1838 and 1840 by Dorset architect, William Walker on the footprint of the medieval building.  Lucy married the Revd Arthur Fane in 1832 and by 1841 they had five children and were living at Boyton (1841 census) where Arthur was a clerk in holy orders.

Sadly, Lucy died on 5 April, 1845, aged 39.  Lucy does indeed appear to have inherited the Norton Bavant and Pythouse estates from her father, as Arthur had to pay £2,000 death duties on Lucy’s estate at her death, a large sum in those days. (Death Duty Registers).  Arthur remarried and continued living at Boyton Manor, becoming a prebendary of Salisbury. (1861 census)

The actual date of the window is unknown but is regarded as being characteristic of the 1840s (English Heritage Listing).  It is unusual for a depiction of the Crucifixion in stained glass to include the two robbers either side of the figure of Christ.  The artist appears to be following the account in Luke, where one criminal rebukes him and turns his face away, but the other turns to Jesus, saying “Remember me when you come into your kingdom”.

In 2015, due to a very generous bequest in the will of the late Gordon Webb, we were able to undertake a project of refurbishment at All Saints.  This included new lighting and the restoration and cleaning of the East Window, which was carried out by Salisbury Cathedral Glass.  Following a recent evening service, we were able to observe the restored window lit from inside and Roger Hammond has now kindly photographed this beautiful portrayal of the Crucifixion for us.